Read What People Say About Working with Mark Ledbetter 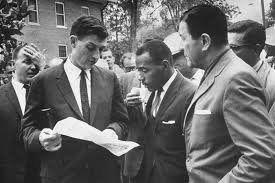 “Mark Ledbetter was a godsend to me after my seventeen-year-old son was killed in a car accident. He handled everything related to filing the lawsuit that ensued, and he skillfully negotiated a settlement without having to go to court. The money we received couldn’t bring back my son, but it did enable me to help finance the college education of his sister and brothers. And Mark was always there to make sure that I had to deal personally with very little that was traumatic.”

“The thing about working with Mark is, I was able to communicate with him directly. A lot of folks, they talk about how they call their lawyer and they always get the secretary, and it’s frustrating. No doubt I recommend him. He’s honest, he’s trustworthy, and he’s credible. He took care of me like I was his son. I can’t say enough about him.”

“Mark is a very trustworthy, kind, and understanding man who cares about his clients. He really cared for my daughter, and saw the condition she was in and was very concerned and sweet to her. Mark is just an outstanding man, and he made absolutely sure we got what we deserved.”

“I’ve enjoyed working with Mark for years on injury cases in both Tennessee and Arkansas. He came up with theories, laws, regulations, experts, that I could’ve and should’ve known about. Mark has quietly, under the radar, developed a reputation as a Super Lawyer.”

“It is an honor to speak about my experience with attorney Mark Ledbetter. His commitment and dedication to my case are a rare insight even in someone that has so much knowledge of the law. He was generous, intelligent and empathetic. If not for Mark I would have been in a precarious situation. In my case, he provided me with protection after the settlement. He turned a modest settlement into a large settlement and made sure I was to be awarded more money after the settlement. Anyone that requires a focused attorney deserves the services of Mr. Ledbetter. It was a positive experience and would only request Mr. Ledbetter if needed again.”

“Some of our cases require that we associate with counsel in other states. Mark Ledbetter is one of the very best. We recently worked with Mark to win a substantial result…Mark refuted the defendant’s claim with his elegant knowledge of engineering and a powerful dose of common sense. We often confer on practice problems. Mark is a lawyer’s lawyer and a real pleasure to work with.”

“Mr. Ledbetter is a wonderful lawyer who works for his clients. He treated my case with personal care. He represented me in a personal injury situation, and each step we made he was there for me, and I was confident in his ability from our very first meeting. He was able to settle my case before trial with a very satisfying settlement. I would recommend Mr. Ledbetter if you ever need legal help and assure you he will take care of you.”

“Mark is a lawyer’s lawyer. As a professional neighbor and friend for more than 25 years, I have observed Mark’s tenacious, detailed, and hard-working efforts as he strives to achieve excellent results for his clients. Mark cares for his clients and he exemplifies the best that a lawyer can be. Frequently, other lawyers ask Mark’s advice about their difficult cases and Mark is available. He is able to think outside the box.”

“I highly recommend attorney Mark Ledbetter. I’ve entrusted him with several of my cases over the years: the ones that were frankly too challenging. Look no further.”

“I don’t know how to put into words what Mr. Ledbetter has done for my family. He was great for me, and I didn’t have one problem working with him. He got on it fast, and he never said we’re done until he did the job. I’d recommend him to anybody. He treated me like family.”

Thanks for your interest in Ledbetter Law Firm!–